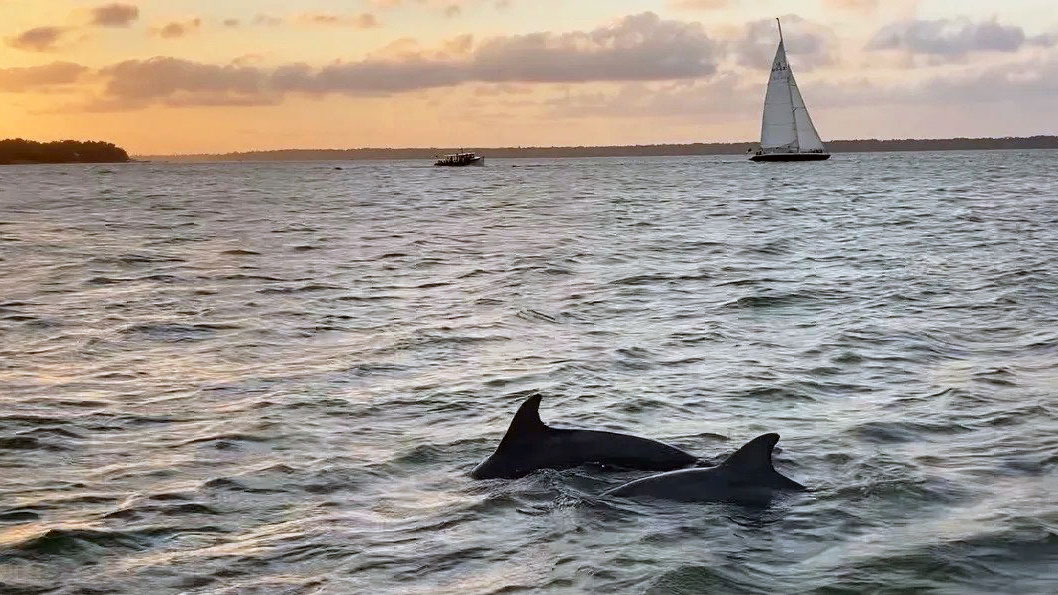 Hilton Head Island is a well known place to see dolphins in the wild. But did you know we also get an influx of manta and mobula rays coming into the waterways every spring and summer?

There was a time that manta and mobula rays where considered separate families. It was only within the last 10 years that scientists had realized they shared the same genus. All mantas have now been reclassified into the mobula genus, making them the largest of the mobulas rays. The largest mobula, the giant oceanic manta, can grow up to 3600lbs and have a wingspan of 29 feet. Here on the island we can regularly see the Atlantic devil rays, with a wing span of 4 feet, and occasionally the reef manta, that can exceed 15 feet. Over the past few years several large reef manta have been spotted along the coastline. This video was taken just off of Hilton Head!

Aside from size, another way to tell the difference is mouth placement. A reef manta’s mouth opening will be at the top of its head, directly between its feelers. An Atlantic devil ray’s mouth will be slightly lower.

But how smart are these creatures? Mobulas have the largest brains out of all fish, with developed areas for problem solving, communication, and learning. They’ve also passed what’s known as the mirror test, meaning they have the ability to identify their own reflection and have a greater likelihood of being self aware. Studies have shown mobula can also identify individuals within a group (specific humans for example) and react accordingly.

Another example of their intelligence is shown through their hunting techniques. Different from most other rays, mobulas are filter feeders, collecting zooplankton with their cephalic feelers into their mouths as they swim along. One such hunting pattern is with a large group of rays, they will begin to furiously swim in circles, actually changing the flow of the water and trapping the plankton inside the vortex they create.  They’ll then line up, three at a time, one above the other, and enter the water vortex, mowing down the captured plankton.  Very few animals have the knowledge and ability to change their own living environment for their benefit.

While the water here is a bit murky, you can still see these beautiful creatures in action. As the spring waters warm up into the early summer, we get an acrobatic treat from these rays. On any given day on the sound, the mobulas will launch up and out of the water, some somersaulting, some belly flopping, others doing a semi graceful swan dive.  Why they do it is still a mystery to scientists. One theory is that the acrobatics are part of a lengthy mating ritual.

The females release a pheromone into the water that drives the males crazy and a chase begins.  More males will join in the chase, forming a train of rays, one following the other, following the female.  This can go on for several days. Over time the competing males will lose interest until only one is left. Whether this popcorning action of jumping out of the water is the female garnering their attention or the male showing off their prowess is unknown, but it does provide for a spectacle show.

Future of the ray

Information on mobula rays is still limited, but numbers suggest their population is going down. While their only natural predators are large sharks and killer whales, human interference plays a pivotal role in their livelihood.  Overfishing, pollution and the effect of by-catch all play a pivotal role in their decline. Locally, there had been recorded documentation of large reef mantas roaming the Port Royal Sound 200 years ago. Unfortunately, these recordings also documented the hunting of these gentle giants with harpoon simply for sport.  The rays we see today pale in size and number compared to the written testaments of the fishermen from the 18th century. Mantas are now a protected species in the United States with the hopes that the protection will give them a greater chance of survival.

Click here for our tour schedule, if you want to get an opportunity to see the mobula rays. Make sure to keep your eyes out on the water for these amazing creatures.  You can be rewarded with a magical display at any given moment.

"The whole family enjoyed it and kids are begging to do it again! "

"Best part of our trip on Hilton Head! "

"Captain Mark is, hands down, the way to go if you want to actually learn about the history and ecosystem of the area."

If you have any personal requests or questions about any of our tours, please feel free to reach out by phone, text or email